I just called back Batam, popo was in the hospital already. She will be in the operation theatre tomorrow at 11am. Almost all of our family were there in the hospital, even mama and my two aunties went back today....

The last time popo went into the hospital was in May 2004. Due to her having low sugar level, she became unconscious.

Tonight the same thing happened, they were all there at the hospital, but I'm not there :( For the past few days, I tried not to worry about her, but the thought came flashing to my mind every single day. I prayed everytime I thought of her.

I can't describe how am I feeling now......whatever it is, the truth is I'm not feeling alright.


Even though, just now I received a big Pre-birthday present by my room mates here...I'm still not happy.

I want my popo to be alright and I miss all my family members....... 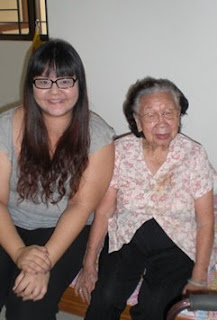 The pic I took with popo in Batam before I came China.

She will be alright isn't it?